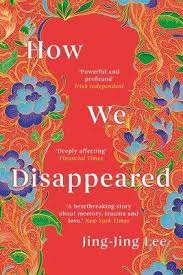 This month we read How We Disappeared by Jing-Jing Lee. The novel is set in Singapore and is told from two different points of view. Firstly, an old lady, Wang Di, with flashbacks to her life as a comfort woman during the Japanese occupation and secondly, Kevin, a twelve-year-old schoolboy being bullied in the 21st century. The story covers Wang Di’s horrendous experiences and her condemnation after the war, both by society at large and her own family, despite them having watched her capture by the Japanese and the involuntary nature of her activities. Kevin sets out to investigate the history of his own grandmother and ultimately the two stories become intertwined.

The book sheds light on little-known history and the theme of the silencing of a tragic history run through both characters’ stories. However, we were not sure the connections between the stories and, in particular, the character of Kevin really worked.

* Note our December meeting will be on Thursday 6th January